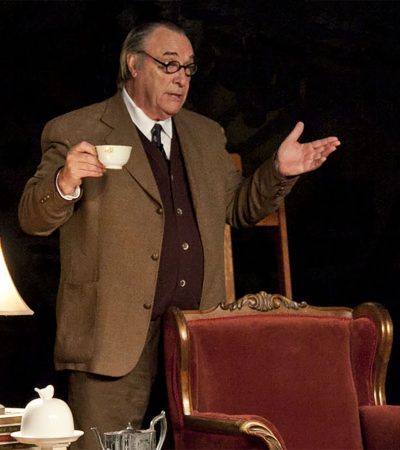 An Evening with C.S. LEWIS

The year is 1963 and C.S. Lewis, the famous British author, is hosting a group of American writers at his home near Oxford. They are about to experience a captivating evening with a man whose engaging conversation and spontaneous humor made him one of the great raconteurs of his day.

Seated in his living room and he recalls the people and events that inspired his thought and shaped his life; of his friendship with J.R.R. Tolkien; why he nearly abandoned the Narnia Chronicles; how he came to embrace Christianity and of the American woman who turned his life upside down.

Described by critics as ‘Extraordinary!’ ‘A Must See!’ ‘A Master Class!’ An Evening with C.S. Lewis has proved again and again to be an enthralling theatrical experience and one which has led many thousands to discover (or rediscover) the continuing impact of a man who died over 50 years ago and whose collected works made him one of the literary giants of the 20th Century.

An Evening with C.S. LEWIS tickets

Broadway In Chicago’s “An Evening With C.S. Lewis” chronicles British literary legend’s life behind the pen
Posted on October 22, 2019 by Andy Argyrakis

An Evening With C.S. Lewis
Best-selling books such as “The Chronicles Of Narnia” and “The Screwtape Letters” made British author C.S. Lewis a household name all around the world, but chances are anyone beyond voracious readers of his bountiful bibliography don’t know all that much about the man behind the pen. That’s all about to change now that London-born actor/playwright David Payne opened “An Evening With C.S. Lewis” on Broadway In Chicago, which is perhaps the most prominent place its played in one form or another for nearly 1,000 performances throughout the past 20 years.

In fact, regardless of anyone’s religious affiliation (or lack thereof), it’s next to impossible not to be moved by his display of ardent and authentic faith that eventually gets tested to its limits in the second half of “An Evening With C.S. Lewis.”

An Evening With C.S. Lewis After seeing the lifelong appreciator actually transform into the literary legend himself inside the Broadway Playhouse at Water Tower, it’s obvious to see why it keeps on picking up steam. The expressive Payne gives a meticulously-detailed account of Lewis’ personal life, chronicling his formative years, studies, development as a scholar and writer with extra emphasis on his closest relationships, including his older brother, wife from unconventional circumstances and fellow author J. R. R. Tolkien (“The Hobbit,” “The Lord Of The Rings”).

In between articulate musings on all of the above, Payne also describes his subject’s unlikely conversion from atheism to Christianity (partially from the prodding of Tolkien), though the one man show never comes across as preachy in its quest to unbury Lewis’ strengths and struggles. In fact, regardless of anyone’s religious affiliation (or lack thereof), it’s next to impossible not to be moved by his display of ardent and authentic faith that eventually gets tested to its limits in the second half.

Although “An Evening With C.S. Lewis” peers thoroughly behind the pen, those looking for insight into specific works or really anything about his illustrious career will find very little outside of a passing mention. Instead, they’re likely to be heartened by a main character who appeared so humble and approachable (despite such immense intellect and fame) that he might not have even realized how these books, movies and now Payne’s fully absorbing play would continue to impact audiences more than 50 years after he left this life.

Getting to know someone in an hour-and-a-half sounds optimistic. Yet in An Evening with C.S. Lewis, the famous literary figure is presented as if you already know him. The set, primarily the armchair where he sits drinking tea amongst books and globes and clocks, makes you feel like you’re at your grandparents’ house, listening to your grandfather’s stories. And the brilliant portrayal of Lewis comes from a man who doesn’t seem far off from the real thing.

For David Payne, it was a complete mastery of his theatrical gifts, but for us there was no acting. We only saw the genuine representation of CS Lewis or as friends called him; Jack. Payne’s delivery, subtle movements, expressions and his uncanny ability to speak directly to you and stir you up in your seat kept you riveted and vastly entertained.

This show was not a boring memoir of his life, but the telling was so rich in detail that you lost your bearings and experienced what he experienced. The greatest of which were the complexity of his relationships