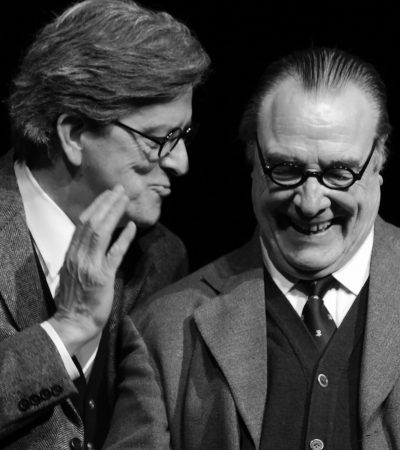 Lewis & Tolkien, Of Wardrobes & Rings is a play set in Oxford’s Eagle & Child pub. Aging and legendary authors, J.R.R. Tolkien and his great friend C.S. Lewis, meet for what turns out to be the very last time.

They were lions of 20th century British fantasy, giants of a literary genre that reached millions of readers, young and old alike, with mystifying adventures to entertain and deep truths to move people’s hearts. C.S. Lewis (The Chronicles of Narnia) and J.R.R. Tolkien (The Lord of the Rings) were also distinguished faculty members at Oxford University and participants in a literary group known as the Inklings. Their robust philosophical discourse served an uncommon friendship that was not without its differences. Life’s circumstances and, sometimes, unresolved disagreements forced an uncomfortable season of estrangement.

In Lewis & Tolkien, Of Wardrobes & Rings we join “Jack” and “Tollers,” as they knew each other, at Oxford’s historic Eagle and Child pub for one last visit, tempered by thawing humor, confession and reconciliation.

Intelligent, Thought-provoking, Resonant, Absorbing, Great acting, Great writing, Funny. It was all about friendship and understanding different points of view. It showed that people can disagree without screaming and walking away from each other; that there are common threads between us.

A review from Show Score

"Where would we be without friends?" opens Tolkien (played by Mark Whitmore). "Some make a modest impact on one's life and some an impact so profound that you know you would not be the person you are now without that friendship." It's a speech that anticipates a love to rival Glinda and Elphaba...

As the literary giants sit in their adjacent chairs, we hear Tolkien's thoughts on the "True Myth" of Christ (the argument that famously helped solidify Lewis's Christian beliefs); Lewis's summary of his marriage to Joy Davidman and her tragic death, his reflections on which are poignantly captured in his book A Grief Observed; and the inspirations for both The Chronicles of Narnia and The Lord of the Rings, including vows that neither would ever be made into films (wink, wink).

This play was beyond amazing. I experienced such catharsis from the actors. It made me feel like I was actually there. I experienced laughter, and sadness (tears). The actors and staff were super professional! I plan on attending this play again, but this time with more friends to join.

Superbly written and acted drama...What a fascinating and wide-ranging and enriching relationship...what a privilege to have been able to experience "being in the presence of" these two great men. This cast is superb! Tolkien (MARK WHITMORE) and Lewis (DAVID PAYNE - who also wrote this drama): it was like being there in the pub with Tolkien and Lewis themselves!